Check out this interview , it was made in 2007 shortly after I arrived in Spain. Just a year before I had been backpacking and was painting pictures of some of the most beautiful scenery from different countries around the world. Stay tuned to see the coming post with those paintings.

As always you are welcome to join my Monday morning painting and drawing classes as well as airbrushing and pinstriping courses. Feel free to get in touch if you would like a personalised painting or mural and in the meantime I hope enjoy the video.

If you have ever wanted to learn the art of pinstriping this is the course for you.

This is one of the most recent paintings that I have made. It is airbrushed using PPG automotive paint on an aluminium panel and measures 102.4cm x 150.7cm. Here you can see the process of making a Hyperrealistic painting. Included in this one is a little friend of mine who lives in the studio.

Years ago I worked as a waiter in the officer’s mess of a military base in London. Hanging on the walls were some spectacular paintings by Terrance Cuneo, an English painter famous for his scenes of railways, horses and military action. He was also the official artist for the Coronation of Queen Elizabeth II in 1953. After months of admiring these masterpieces someone informed me that the artist always discreetly painted a mouse in his artwork, and whenever I would find one of them it was very exciting.

For years I included a paw print in my artwork as I used to have dogs. Recently while working late one night I spotted a mouse running through my studio so have decided to include him into the painting. He can be seen in the corner with his own easel set up and creating a mouse sized masterpiece of the car as seen from his point of view. Since then I have bought a few pet mice to keep him company and he comes to visit them every night, and sometimes day when he thinks I’m not looking.

This painting is finished with a high gloss lacquer and a slim aluminium frame, ready to hang on the wall and become the talking point of any room. So if you like it don’t hesitate to get in touch.Share This:

Under the high patronage of his serene highness prince Albert II of Monaco, the 12th edition of Top Marques took place at the Grimaldi Forum from 16th to 19th April 2015.

I would like to thank TV presenter Noel Edmonds and Trevor Gabriel for giving me the privilege to exhibit my artwork next to their elegant car “La Riviera” which celebrates the style and grace of the pioneering sports car era of the 1930`s.

This prestigious event – billed as the ‘ultimate luxury car show’ by Bloomberg – was viewed by an estimated 25 million after being televised by all the major TV networks, and broke all records when it welcomed more than 42,000 visitors over the four days.

One of the features of this annual show is that guests can test-drive a selection of supercars around the streets of Monaco, including sections of the Formula 1 track. Police even hold back traffic in the famous Monaco tunnel so the cars can get a clear run at speed.

To top it all off, it was an honour to have met one of the members from the famous band Kool and the Gang. Please remember as you read through my blog, you can enlarge any of the pictures by clicking on them.

Instinctively I’m drawn to paint on aluminium panels due to my background of training and working in auto body shops restoring and re-spraying cars. However, I do get excited when I first hold a newly stretched artist canvas in my hands. The taught, perfectly flat, pristine white surface calls me, and like a little kid I just can’t resist lightly flicking it with my fingers to hear that satisfying sound resonate like a soft drum beat. This short yet wonderful video gives a great insight to the laborious and meticulous process of producing the fine art canvas. In doing so it also pays homage to the unsung heroes that contribute to all the masterpieces created throughout history.

On Wednesday November 12 at 8 pm Galería artelibre will present the 9th edition of the Yearbook “Art and Freedom.”

The presentation will be held within the opening of the exhibition “More than realism VIII” 2014, Exhibition Hall of the Art Association of Aragon, c / Lagasca, 21 – Zaragoza.

There will be a collection of great Hyperrealistic paintings by some of the best artists from all over the world, and everyone is invited. I am pleased to be participating with the book and exhibition for the second year and will be exhibiting the painting “Ford Maria de la O” which you can see on the top right page.

I am very proud to have won first prize in the advanced category of the art competition at the Homes and Gardens show last week, with my Hyperrealistic painting “Ford Maria de la O”. All the hundreds of hours of hard work were worth it, the painting is hand made using an airbrush and PPG automotive paint on an aluminium panel. It measures 66.8cm high x 104.3cm wide, and has been finished with a matt lacquer. To be precise it’s a 2 component polyurethane lacquer produced by PPG for Lamborghini, so it is very good quality. Thank you to the judges, and all the public for such great feedback, to GM Promotions for organising the event and Casas Espania the sponsors of the art competition.

It was an honour to share the stage with Mark Stacey antiques dealer, auctioneer and TV personality last week during the Homes and Gardens show at La Finca Golf Resort.  Thanks to his  wonderful and light hearted introduction to my airbrushing demonstration, it went nice and smoothly with a few laughs in there for good measure. As I have had so much practice painting skulls on motorbike tanks it only made sense to paint some for the demos. They were very popular and both got snapped up as soon as they were finished.

Recently my lovely Mum was going through her big wicker box of photo albums and she put aside some pictures of me next to classic cars just like the ones in my paintings. A class mate took them at Disney World when I was about 13 years old. It was an amazing holiday and my second trip to the US. The first trip was to the East Coast and Disney Land in 1981. At the age of 7 my parents took me to California, Las Vegas, San Francisco etcetera and ever since I’ve always loved America.

Knowing my Dad likes these style of cars I took the pictures to show him when I got back, as a gesture to say thank you for letting me go on such an incredible school trip. As a kid I was a fan of sports cars, especially Lamborghinis and I didn’t even remember these pictures at first. However seeing the photos again over twenty years later has struck a cord. Now, having matured a bit I appreciate the style and flare a lot more. Maybe it’s because they remind me of my childhood (or maybe I’m turning into my Dad!). One thing’s for sure, after repairing and painting so many classic and modern cars I feel todays designs just don’t compare to those days, but it’s nice to see the style showing a return.

You can click on the images to enlarge them. 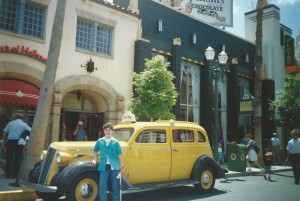 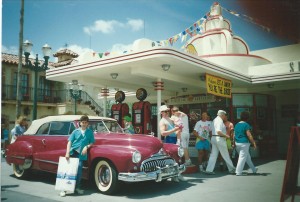 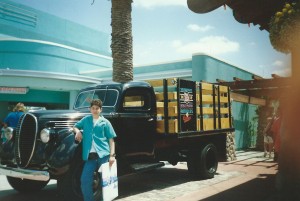